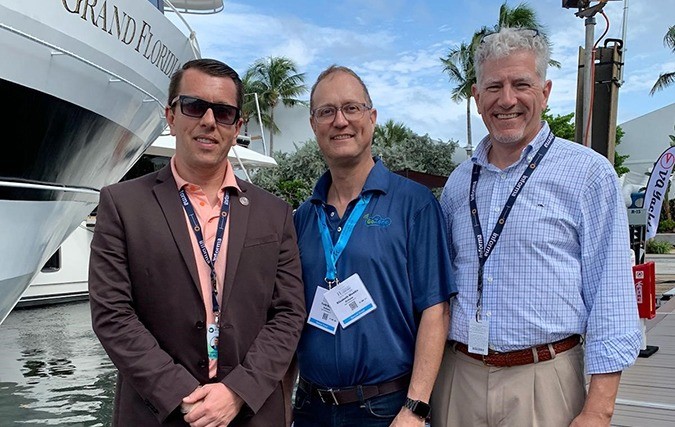 This week marks the prestigious Wi-Fi NOW conference and expo. One of the driving themes for this year is Twenty Years of WiFi. GoZone WiFi CEO Todd Myers (middle of photo) is no stranger to WiFi and it has been a major part of Todd’s own journey. Twenty years later, he has seen the mass adoption of  both basic and smart WiFi and sees even more growth, long into the future.

The Age of Dial-Up

Before the term “WiFi” was even thought of, Todd and his team needed to prove a wireless signal was commercially viable. “It was the late 90s to early 2000s that WiFi began emerging.” Todd says, “One of the biggest challenges for getting WiFi off the ground was proving to investors this technology would actually work, and that there was a solid business case.”

Tech companies were creating hardware that created a wireless Internet signal, aka WiFi. These companies believed WiFi would be usurping the then-current Internet medium, dial-up. One problem —  there were no consumer products available at the time that could connect devices to these wireless signals. It wasn’t long though before one of the big tech producers, Intel, began creating a computer chipset that had WiFi-connecting capabilities.

“Once computers had the ability to connect to WiFi signals, investors were ready to put their money into these WiFi companies,” says Todd.

How did the early WiFi companies know it would be successful, especially given the reality of no compatible devices available at the time? Todd answers, “We didn’t know. We believed in what we created and believed it would take off. That’s the risk of starting a business.”

The Age of Smart WiFi

Fast forward a decade and a half. Todd had founded multiple companies in the WiFi and service provider arenas. He had helped implement WiFi and related services for businesses, telcos and cities all over the world. He was ready to enjoy the fruits of his labor. Todd paused in 2013 and began traveling as a way to unwind from his entrepreneurial efforts.

His R&R didn’t last long though. While vacationing in Puerto Vallarta, Mexico, Todd realized that WiFi was in desperate need of an upgrade  —- easier access for consumers outside their home.

“I’d go from my hotel, to a restaurant, or to a few other locations on certain days; and what I noticed was the tedious task of trying to connect to the different WiFi networks.” Todd says, “Every WiFi network was password protected and you had to hound down a worker or manager to give you the password. And we’re not talking about an ‘abc123’ password. We’re talking about long, encrypted 26-digit passwords that made connecting a chore.”

The entrepreneurial fire was lit, and Todd was back to work. Todd came up with the idea of creating a captive-portal platform for simpler WiFi login and access that would benefit the guest and the venue, GoZone WiFi was born. The first smart WiFi tool Todd began working on is now known as Marketing4WiFi. The solution offers advanced branded captive portals that provide simple access to WiFi guests, while providing the venues with tools to collect guest information and to re-engage with them.

Todd explains the mutual value for businesses and smart WiFi users. “Everyone is on social media. You sign in with Facebook, Instagram, or even an email, and you get free WiFi in return. Both parties win from it.”

Todd’s innovative WiFi monetization ideas didn’t stop there. Over these past five years, GoZone has created an Ads4WiFi platform and Analyics4Wifi platform to complete the Smart WiFi Suite. The suite is designed to offer many valuable tools to help venues see a return on their WiFi infrastructure investments.

For Todd, it’s been a treat to see how WiFi operates now compared to what it was in the 90s. “WiFi used to be just for internet connection. Now look at it. Venues use it as way to market their business. Cities are using it to advertise local businesses. It really has changed from the days of just trying to get people to use it.”

Todd also sees how WiFi is helping to make information more accessible to people everywhere. “… Not everyone can afford Internet access for their home. WiFi is helping to bridge the the digital divide and will continue to do so for many years to come.”

The Future of WiFi

Todd says WiFi will continue to grow as a ubiquitous way to connect us and our things. “WiFi will continue to be used to connect almost every type of device, from our mobile phones, to our personal assistants, to our televisions, to our vacuum cleaners. It is already accepted globally and already embedded with most new ‘things’. With the launch of WiFi 6 this year, ultimate long-term scale-ability can be achieved.”

Todd mentioned the newest 5G cell towers that are being brought out, and acknowledged that they could be a competing factor for WiFi. “This new 5G sounds appealing, but there has yet to be a standard created and it will be VERY expensive to deploy.” In the meantime, venues control the technology that is available for connectivity, and the cost and familiarity with WiFi will prevail for indoor environments.”

The future of WiFi is bright, filled with opportunity to improve customer experiences, marketing for businesses, and even creating meaningful change to the lives of people all over the world. For exciting updates from the WiFi NOW Conference and the future of WiFi, sign up for our latest news and follow us on social.

Previous How Do Your Customers Use Social Media? Data Can Answer That Question. Next The Essential List of MSP and Reseller Services

Thank you for signing up!
Something went wrong.